Member of Parliament for Ningo-Prampram, Sam Nartey George, has made a mockery of the Ghana Revenue Authority’s decision to modify the phased approach for the implementation of the E-Levy starting May 1.

GRA in a statement on April 28 indicated that the decision to modify the phased approach was reached following its assessment of the readiness of charging entities to integrate with the E-Levy management system.

“Following the Ghana Revenue Authority’s assessment of the general readiness of some Charging Entities to integrate with the E-levy Management System, the Commissioner-General has decided on a modified phased approach for the implementation of the Levy from 1st of May 2022,” parts of the statement read.

Reacting to the statement, Sam George admonished the tax-collecting agency to learn to listen to technical advice when it is given.

“Dear @GhanaRevenue [GRA], next time take technical advice when it is given. When you rush, you would crush. Cheers,” he tweeted.

Earlier, the lawmaker had predicted that the GRA would not be able to roll out the implementation of the E-levy as seemed impracticable.

“I am extremely confident that the @GhanaRevenue [GRA] CAN NOT implement the obnoxious e-Levy in the format they have advertised on 01-05-2022. It is simply impracticable and untenable at this time. They either postpone start date or revert to Phase 1 implementation as earlier advised” the MP said.

The E-levy bill was passed on March 29 after the minority caucus staged a walkout – a move it said was to deny the majority group a voting quorum.

Two days after its passage, President Nana Akufo-Addo assented to it with the Finance Minister, Ken Ofori-Atta, indicating that implementation will begin from May 1.

However, the Minority Caucus is in court challenging the passage of the E-levy bill.

It contends that government and its officials will be in contempt of court should they go ahead with its implementation.

Read The Full Statement From GRA 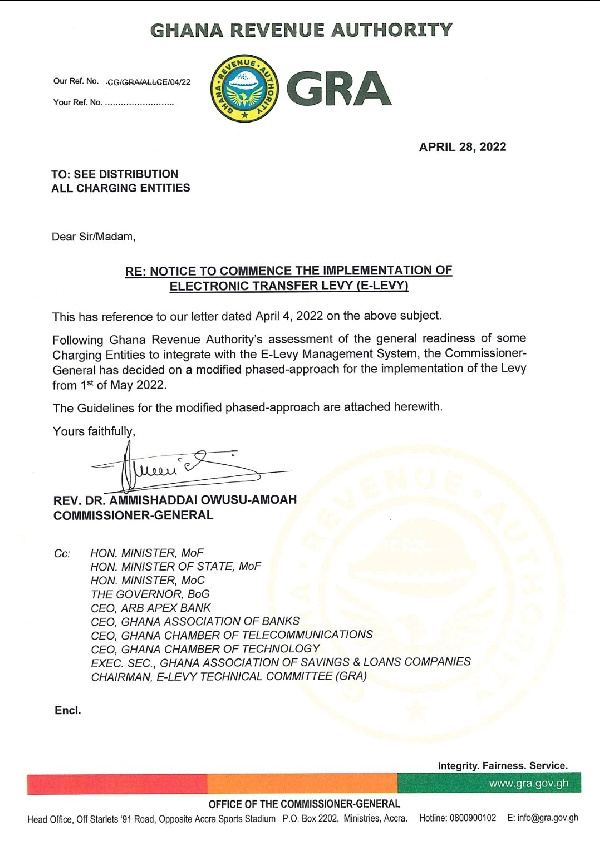 Watch the latest episode of The Lowdown below:

He is a true son; very loyal – Kufuor heaps praises on Dr. Bawumia

Ntim will win to be NPP National Chair – Kamal Deen

Game over for Wontumi as all his candidates for constituency polls lose?

Boys “Press Press” A Girl In A Swimming Pool (Video)

Turkey threatens to block Finland and Sweden’s attempt to to join...