The Ghana Immigration Service (GIS) says Ghana is on the lookout for over 1,800 jailbreakers in Nigeria.

The Comptroller-General of the GIS, Laud O. Affrifah in a statement directed personnel of GIS to be on high-security alert to prevent the criminal escapes from entering Ghana.

“Information gathered by the Service indicates that more than 1,800 prisoners escaped from the Owerri Custodial Centre, Imo State – Nigeria on Monday, 5th April, 2021.

“I am directed to bring the incident to the attention of all controls. You are to inform officers and men under your command to take note and be on high-security alert to prevent the entry of these criminal escapees from entering the country,” the statement said.

“Treat as urgent and act accordingly,” the statement concluded.

About the 1,800 jailbreakers in Nigeria.

More than 1,800 prison inmates escaped from the Owerri prison in Imo State, Southern Nigeria, after a heavily armed gang attacked the prisons.

The armed men found their way into the prisons, engaged guards in a gun battle and freed inmates, the National Corrections Authority said in a statement.

One inmate died in the stampede that followed, officials said, and one police officer sustained a minor bullet wound to the shoulder. The security officers have meanwhile repelled an attack on the armoury at the prison.

The authorities laid the blame for the jailbreak on a rebel group that promotes the decades-old cause of secession for Biafra, a southeastern territory.

“I can confirm that the Imo State Command of the Nigerian Correctional Service was attacked by unknown gunmen in Owerri,” Imo state corrections service spokesman James Madugba told AFP, adding that the number of escaped inmates was yet to be confirmed.

The assailants arrived in pickup trucks and buses before storming the facility, the correction authority said.

No group claimed responsibility for the assault, though President Muhammadu Buhari called the attack an “act of terrorism” carried out by anarchists and urged security forces to capture the assailants and the escaped detainees.

Nigeria’s security services have launched a search operation to recapture the inmates, whose number was put at 1,844. It is not yet known how many of them were convicts and how many were just awaiting trial.

Justice is often slow in Nigeria, with people spending years in jail before their cases are heard.

Nigeria is a country where Boko Haram, a terrorist group has reigned in parts for about 15 years, even capturing military barracks, with no soldiers fleeing. 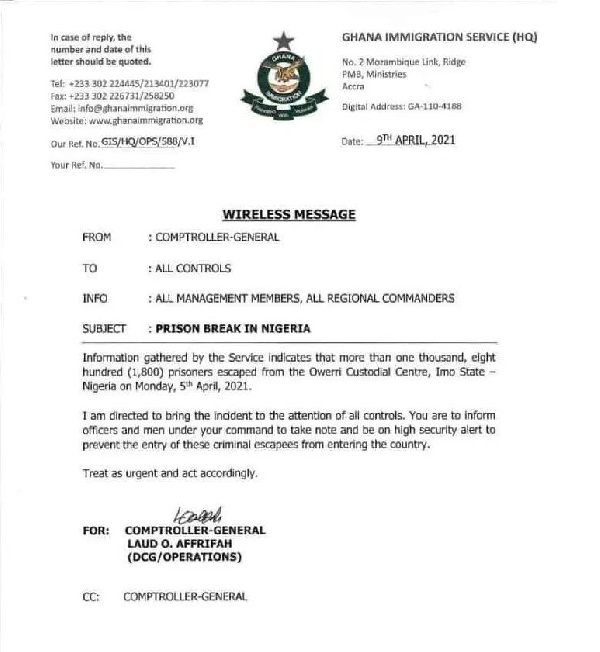 Man, 27, grabbed for the alleged murder of stepdaughter