TWO Motor riders popularly known as Okada have met their untimely death at Ahomamu, a community near Akyem – Begoro in the Fanteakwa North District of the Eastern Region

The deceased persons – Biada Azutuor, 40, and Tetteh Peter both Okada riders on Sunday, March 21, 2021, at about 5pm lost their lives when Tetteh Peter was riding with a pillion rid from Akoradako heading towards Ahomamu.

According to a Police report, Peter on reaching the Kwaku Botwe community wrongfully overtook another Okada rider ahead of him on the dusty road and in the process collided head-on with Biada Azutuor, who was also riding from the opposite direction. 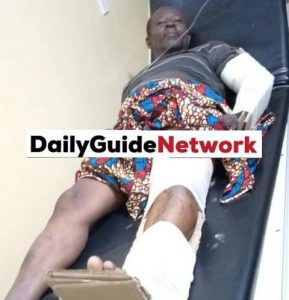 Tetteh Peter was also pronounced dead at the Begoro Government Hospital when rushed to the facility together with the passenger who is now recuperating.

Both bodies of the deceased have been deposited at the same Hospital pending autopsy.

Meanwhile, the Eastern Regional Commander of the MTTD of the Ghana Police Service, Chief Superintendent Stephen Ahiatafu has revealed earlier that motorbikes (Okada) and tricycle (Pragia) killed 20 out of 60 people who died on roads in the region from January to February 13, 2021.

Superintendent Ahiatafu explained to DGN Online that ”motorcycles and tricycles are killing more people than the vehicles”.

According to him, most of the motor riders dont have a license adding that “we are going to embark on series of checks on them the public should not take it to us that the police is harassing them. When we arrest you we will ensure that the law takes its course”.